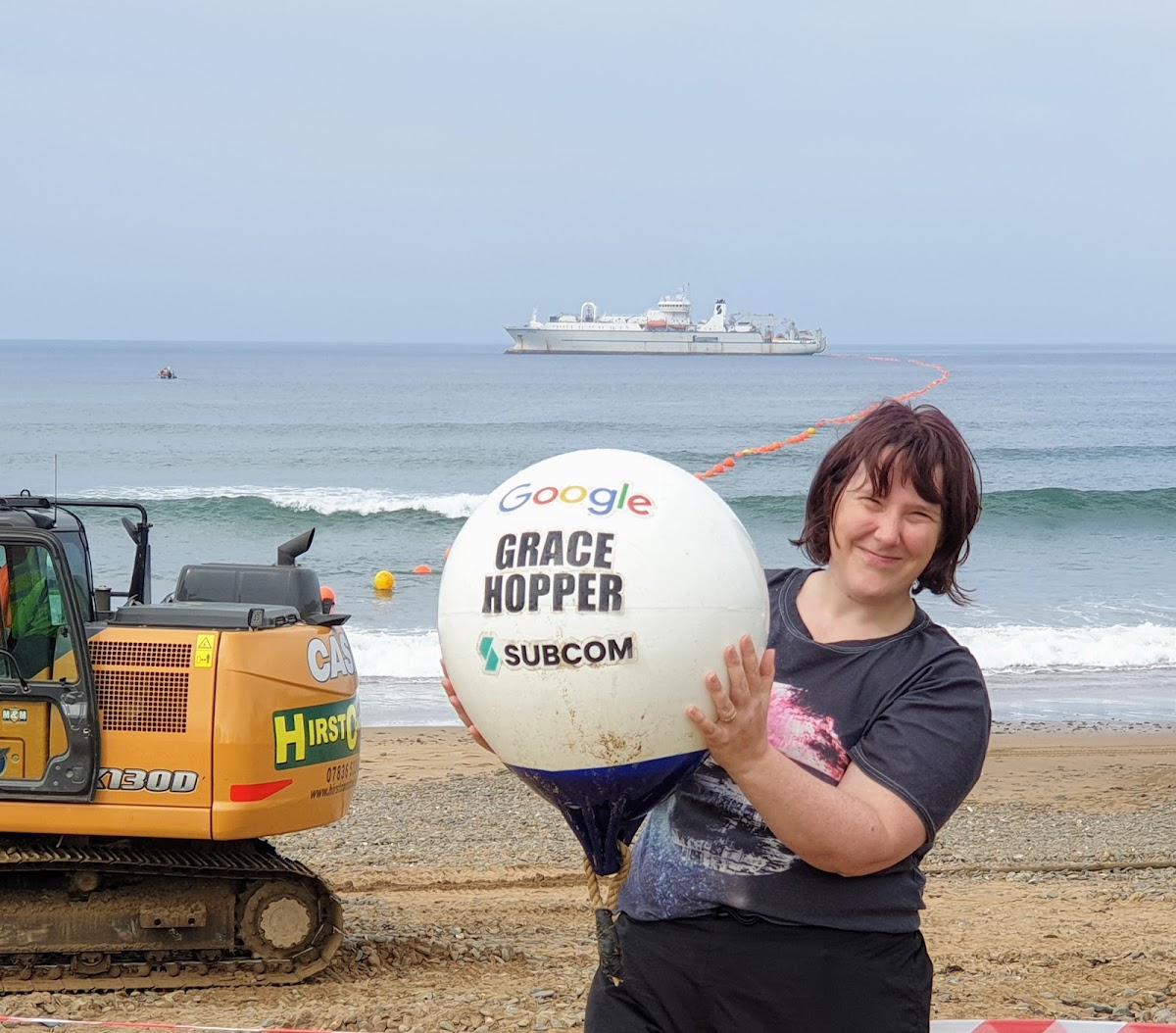 Impressive scenes on Crooklets in Bude today as a large team of engineers and hefty machines slowly pulled, with tonnes of tension, onto shore the latest transatlantic cable – the Grace Hopper Cable.

The cable was announced back in July 2020. They first attempted a landing in July 2021 but had to cancel due to the tides dragging the cable North towards Northcott. Today’s sea was more forgiving and the team managed to successfully bring the new private line up the beach.

The technique was surprisingly simple for something offering the bleeding edge tech; basically two tag teaming machines, a big pulley and a lot of rope!

The tension was palpable though and not just from the tonnes in the rope, but also the risk of serious failure. The beach was closed due to the risks from the machinery but also the possibility of the rope or cable snapping. A snap under that tension would have caused a terrible whip and probably life loss. There were still some idiots however who decided that after being told they couldn’t surf at Crooklets – went to Middle Beach and paddled across to paddle right over the cable! Thanks to the Lifeguards being on the ball with moving them away.

I’m a software engineer by trade, but I still admire big hardware engineering. The design, research, planning and skills to thread a cable halfway across the world is incredible. Building on years of technological innovations to see what we saw today. I was excited for the team, for technology moving forward, and proud it was happening in Bude.

The team were very happy to share their knowledge and passion, allowing me to have a quick photo op of the final buoy before it was whipped away, giving me a sample of the cord. I enjoyed sharing that passion and knowledge with a few curious onlookers wondering what all the commotion was about.

The “cable” is 32 fibres, with each not being much thicker than a cat’s whisker. The little bundle I have is less than a credit card’s width in total. The inner fibre core is surrounded by a metal ring which is about the width of my little finger’s nail – that powers repeaters that amplify the signal under the sea. The repeaters are powered by a constant direct current, so all repeaters in a cable are in series (if you know your physics, you understand the risks there!). The power is sent at incredibly high voltages to be as low current and as efficient as possible. The whole width of my fiber sample is only the width of my thumb! Very different from the massively thick telegraph wires we sometimes see exposed on the beach.

The surprisingly slender cable now leads up on the right side of Crooklets as you face the sea, and connects to a small manhole. The line enables speeds of 340Tbps (Terabits per second) – impossibly fast to imagine when many of us in Bude still can’t stream Netflix in the evening. Fingers crossed that the flurry of activity reminds providers that Bude is a substantial hub of internet connectivity, and a critical backbone of the internet’s infrastructure. It’s a town deserving of at least keeping up with modern speeds! But congratulations to the team and engineers that were involved.